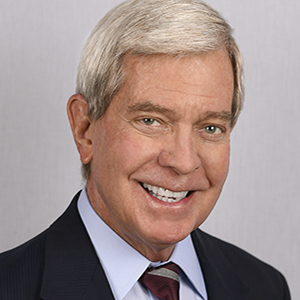 Bill Carter founded Carter Financial Management in 1976. The firm has grown to include a full suite of experienced financial planning professionals managing over $1 billion in assets. Dedicated to client service and professional excellence, Bill puts his deep knowledge of tax, investment and estate planning to work in helping clients define and reach their financial and life goals.

Bill has been quoted in publications including The New York Times, Money Magazine, USA Today, The Wall Street Journal and The Dallas Morning News, among others. He has also been interviewed on numerous television and radio programs.

One of CFM’s core values is a commitment to serving clients, peers and the community. As a dedicated and active Texas A&M alumnus, Bill leads by example. Carter (’69) is a past president of the Association of Former Students and past chairman of the Board of Trustees of the Texas A&M Foundation. He has also served on the boards of Aggie organizations including A&M’s Private Enterprise Research Center, The Press Advancement Board, the President’s Council Executive Committee, and the 12th Man Foundation. In the Dallas area, Bill has served on the boards of Children’s Medical Center of Dallas, Baylor University Medical Center, and The Senior Source.

Carter Financial Management has been named to D Magazine’s list of Top Wealth Managers in Dallas every year since 20151. Bill was also been included on the 2021 Forbes Best-In-State Wealth Advisors list.2 He was inducted into the Texas A&M University Cadet Hall of Honor in 2009 and was named Texas A&M University College of Agriculture and Life Sciences Outstanding Alumnus in 2011. He was also selected as a recipient of the highest honor bestowed upon a former student of Texas A&M University, the Distinguished Alumnus Award, for his professional achievement and service to the university.

Bill earned a Bachelor of Science in Agricultural Economics from Texas A&M University, where he was student body president and a distinguished military graduate.

Bill and his wife, Fran, split their time between Dallas, College Station and the family homestead in Decatur, Texas. They enjoy the arts, traveling, fishing, supporting Texas A&M athletics, and spending time with their rescued dogs and cats.

Certified Financial Planner Board of Standards Inc. owns the certification marks CFP® and CERTIFIED FINANCIAL PLANNER™ in the U.S., which it awards to individuals who successfully complete CFP Board’s initial and ongoing certification requirements.

D Magazine asks every wealth management firm and team in the Dallas-Fort Worth chapters of the Financial Planning Association® and the Investment Management Consultants Association® to tell them about their practice. The final list is selected based on these criteria: top firms or teams must have total assets under management for individual clients of at least $100 million; a 95 percent client retention rate in the last two years; no current disciplinary action; and at least five years of experience. They must also be a fiduciary for their clients, and their compensation model cannot be commission-based. A panel of esteemed local wealth managers reviews the final list. Neither the firms nor their employees pay a fee to D Magazine in exchange for inclusion in the list. Inclusion on the list is no guarantee as to future investment success. Raymond James is not affiliated with D Magazine. The inclusion of a financial advisor or practice on the list should not be construed as an endorsement of the financial advisory practice by the D Magazine. Raymond James is not affiliated with any of the above-mentioned organizations.

Raymond James is not affiliated with the organizations listed.